Ketu in the First House – Psychic powers and Heightened sense of Discernment! Ketu is a headless planet or the tail part of the dragon and is referred as ‘south node of the Moon’. Ketu in ascendant natives are magnetic and mysterious personalities. First house in Vedic Astrology represents physical body, aham-ego, well-being, early childhood, self-esteem, vitality, ethical values, and moral disposition. It also denotes native’s fame, honour, and physical appearance especially physical head. Ketu as the most psychic planet, its presence in the first house adds deep psychic dimensions to the native’s personality. Ketu in this house impacts native’s behaviour, relationships, social status, and their attitude towards spirituality. 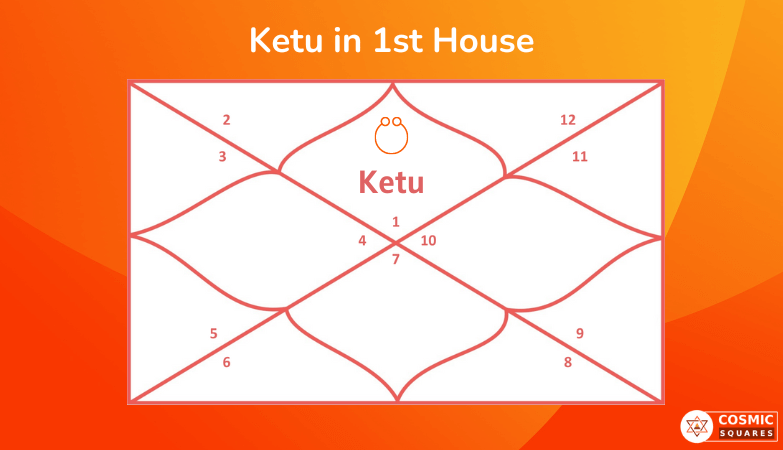 Ketu will bestow amazing opportunities to acquire higher knowledge, meet powerful Gurus, and progress in the journey of soul realisation. These natives will have heightened self-awareness and attain spiritual wisdom. They will be hypersensitive to other’s emotions which makes them sad or emotional quickly. Marital life of these natives will be average. They enjoy marital bliss only under benefic affliction by benevolent planets on Ketu. When Ketu is undignified, their spouse may be disloyal, and they face legal separation. If Ketu is weak, it can result in health issues. They may suffer from diseases that are difficult to diagnose or have uncertain cause, infective diseases, or disorders like deafness, speech disorders. These natives will be liars, ungrateful friends, and live life in fear or sense of insecurity, if Ketu is under malefic aspect. They may be dismissed from job, afraid of physical intimacy, and responsibilities.

Ketu in the first house natives will have mystical tendencies and psychic abilities. They usually master these abilities to make the best out of their career. They are straightforward people with great clarity about life. Since Ketu is a psychic planet, career options related psychic dimensions like Astrology, Tantric sciences, Vaastu Shastra, healing, and Tarot gives the natives great success. They tend to become popular spiritual people. They will travel a lot to fulfil their sense of adventure and liking towards isolation/ detachment. Ketu poses ample chances in sourcing motivation in life with massive support from uncertain sources like social relationships that render support, moral help, financial help, and emotional support.  If Ketu is undignified, these natives will be wandering aimlessly, they might lack consistency and stability. They will be odd ones in the friend’s circle and behave in a strange manner. They will have uneven or no appetite most times. They will be inconsistent with their goals or ambitions in life.

The areas affected due to the Ketu in the 1st House:

Ketu in ascendant natives will be spiritually resourceful, daring, and fierce. Ketu bestows deep piercing insight into conscious mind and the way it functions. Natives put this inherent skill to read other’s mind or strategize their moves. Ketu, as a Moksha Karaka planet when placed in the house of self-identity, it creates ample opportunities to further spiritual practices and philosophy of life. This planet of intense concentration power and deep perception makes the natives apply their skills on their spiritual pursuits. The strength of this placement of Ketu can elucidate in-depth information on native’s past life, their deeds, and karmic duties related to it. Ketu also denote the evolutionary state of the soul. Dignified Ketu means that the native has lot of clarity in life and moves towards supreme intelligence. Ketu has the potential to smoothen hiccups that surfaces through bad placement of Rahu in the chart. Ketu can also help the native realise and work out of if they are in morally wrong place due to Rahu.

Ketu in the first house possesses the power to make an individual detached, callous towards relationships, and material desires. These natives will find it hard to differentiate between the good and the bad if Ketu is negatively afflicted. If weak, Ketu magnifies lower emotions like fears or phobia and cravings. It also results in increased vulnerability in love relationships. These natives with the placement of Ketu in the first house will be of shy or introvert nature. Undignified Ketu might result in exaggerated self-consciousness or self-esteem. They also get confused a lot on their self-image and often feels lost in creating an identity for themselves. They may make impulsive, arrogant decisions filled with anger. When the lord of the ascendant is in a weak or an inimical house, the native suffers terrible aftermath of bad spiritual techniques

Ketu in various Houses according to Vedic Astrology