Mars in this seventh house of harmony and balance can make the native argumentative and quarrelsome. seventh house in Vedic Astrology represents marriage, partnerships- legal bindings, legal agreements, and business partnerships. 7th house is a representative of external environments or other people as opposed to the first house which is all about the self. Mars here as an action-oriented planet, in this house makes the native deeply aggressive and impulsive. 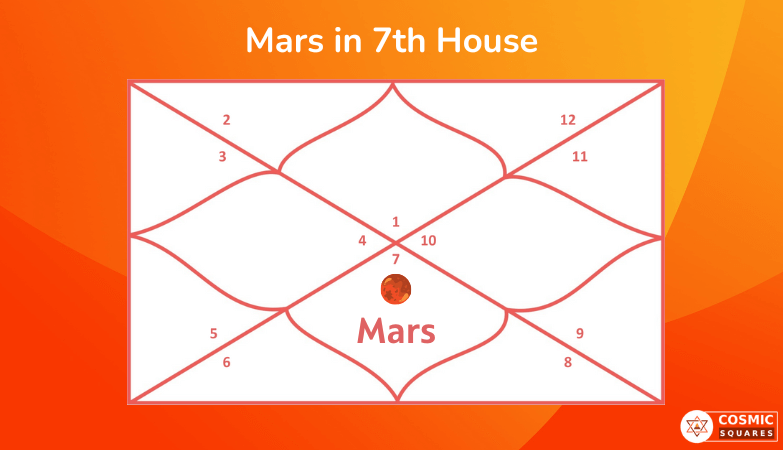 The native is passionate and affectionate towards his partner and can be dominating in the marriage, which could lead to disagreements in the relationship. Mars in this house natives are affectionate and passionate people. They attract a good looking and courageous spouse yet dream about an open marriage. Debilitated Mars results in trivial tiffs their mother or family. Any affliction on Mars in this house can make the native have excessive desires or face hindrances in finding a marital partner. This is a dosha called, Mangal Dosha that has great influence on marital life. If Mars in this house is afflicted by malefic planets or inimical planets, the native may be unfaithful in their marital relationships and constantly chase after the opposite sex for excitement. These natives can go through a painful separation or costly divorce. They might also have multiple life partners.

Mars in this house represents the anger and fire we carry within us from various incarnations. Mars is equated to the energy of a soldier or a warrior. Strong Mars enhances this fire in a positive way and weak Mars expresses this anger in the most unrefined way creating problems in their workplace or neighbourhoods. Strong Mars blesses success in roles like policemen, soldiers or armed forces officials, warlords, and fighters. They are also seen skilled in weaponry, archery, and dealing with explosives. In the social sphere, Mars often throws situations that test native’s strength and honesty. Dignified Mars blesses strong business partnerships and successful ventures that involves frequent domestic and overseas trips. If Mars is debilitated, they lose money or get cheated by their partners in business ventures. Mars in the seventh house along with Jupiter in the sixth or eighth or twelfth house tend to put the native in tough legal or litigation issues. This also gives rise to financial losses and losses of real estate.

The areas affected due to the Mars in the 7th House:

Positive placement of Venus and seventh house lord is important to derive more auspicious results from this position of Mars. Mars revitalises the natives mind and their approach towards relationships. Married life of natives with positive conjunction from beneficial planets tends to be blissful. They seem to stick to each other even during the periods of adversity. They support and nurture each other. Position of Mars in the Kendra house- (1, 4, 7,10), if happens to be any of its own signs- Aries or Scorpio or exaltation sign- Capricorn, it forms a yoga called- Ruchaka Pancha Mahapurusha yoga. It is stated in Vedic astrology, such natives enjoy positive traits martian energy. Both men and women of Mars in 7th house celebrate each other, mutual trust, and love becomes their greatest strength/tool.

Mars in seventh house natives go through restlessness, impatience, and lack of ability to compromise or create an environment of harmony. This also manifests as rude intonation and body language; they lose their temper quite often and burn bridges to obtain marital pursuits or entrepreneurial success. They refer to themselves as straightforward, but they use this frame to speak rash or blunt about others. Since these natives are adventurous, they love racy moments, they frequently change their partners to satisfy their excessive levels of desires. If Jupiter or Venus is well placed in the chart, the native may avoid certain extreme negative implications of Mars in this house.

Mars in various houses according to Vedic Astrology