Mercury in Sixth House – Competitive, Loud, and Analytical! Mercury as a planet of communication and intelligence when placed in sixth house the native gets sharp mind and crystal-clear thinking patterns. It also alters the attitude towards peers, routine work, and profession. Sixth house in Vedic Astrology represents obstacles, foes, diseases, separation/divorce, and death. Sixth house also denotes debates, criticism, and tactics. Mercury in this house imparts great intelligence and sharp intellect. Sixth house is one of the difficult houses called Dushsthanas, malefic planets perform better in this house. According to Bhrigu Sutras the natives with this combination had to go through initial struggles, both entrepreneurial and educations facets of life. 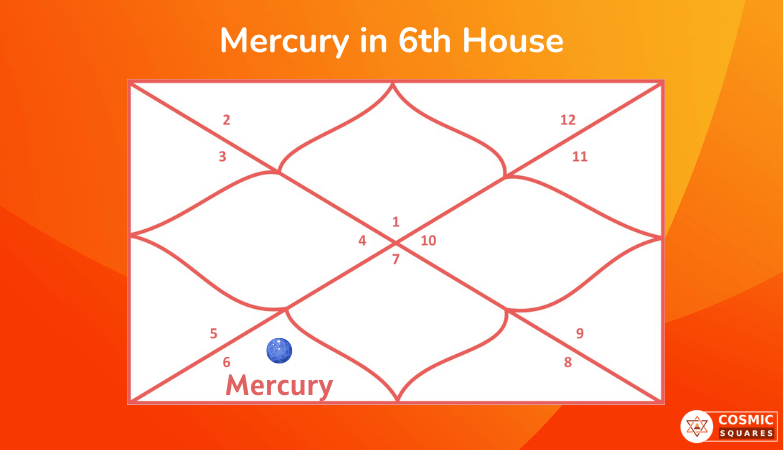 Love life of these natives will be exciting and adventurous. Sometimes they tend to have more than one partner or casual flings. These natives get settled quite late in their life around 32 age of life and have lucky & fortunate children. Sometimes they get into huge debts or legal complications if Mercury is ill placed. If mercury is undignified the natives are vulnerable to skin diseases, blood pressure, and other chronic ailments related to stress or nervous disorders. At times they get real lazy and refrain from hard work. They can have critical or offensive style of communication.  They are fond of partying and socializing sooner or later they get addicted to intoxication resulting in loss of wealth due these addictions.

Natives with Mercury in 6thhouse makes the native successful in the fields of computers, electronics, and accounts. These natives will be a deep thinker, filled with logical ideas, and analytical. These natives with a hyperactive mind tend to remember every single thing that others forget. Natives of Mercury in the sixth house are actively involved in social services, well-being of people like poor, deserted women, or orphaned children. They use their critical thinking skills to save the company’s money or tax money in their career as accountants. The native can be seriously affected by obsessive-compulsive disorder, where they want everything in a certain way. They have too much pride and show off their success in every chance they get. Sixth house belongs to the triangle of wealth and strong Mercury can result in ample wealth gains.

The areas affected due to the Mercury in the 6th House:

Positive placement of Mars, Saturn and sixth house lord plays an important role in increasing the goodness of this position of Mercury. Mercury aspects intelligence, communication style, sincerity, and accountability of the native. Natives with Mercury in their 6th house have hyperactive mind that results in nervousness at times. They are naturally good at sorting difficult and intricate things, organising and creating lists and charts. Their attention to detail is always on point and their understanding on the mechanics of things are also to the T. They are always looking for chances to be helpful and be useful to others. Mercury makes them good at mechanics or everything that demands in-depth manual dexterity. These natives are dependable and trustworthy in nature.

The native naturally tends to look at the flaws and glitches in everything they see. This often makes them avoid good relationships or job opportunities that makes them lazy. If they harness this behaviour for good, they can go places in the fields of accounting and tax department. They are overly conscious of their health; they take extreme cautions for simple aches or muscle pulls that other people usually overlook. Regardless of their Himalayan confidence they face health hiccups due to anxious and overthinking nature. Their dependability and indifference towards other’s praise make them vulnerable. Their mental unhappiness leads to depression

Mercury in various Houses according to Vedic Astrology