The new moon day of Shravana month is Hariyali Amavasya or Aadi Amavasya or ஆடி அமாவாசை (Tamil month of Aadi). Hariyali means greenery in Sanskrit; since this Amavasya is the first Amavasya in the monsoon period where there is immense green flora around, it is identified with the new green foliage.

Aadi Amavasya is the first new moon after the Southward travel of the Sun, the Dakshinayana Kala. This auspicious entry of the Sun in Dakshinayana or Pitru Ayana makes the first Amavasya highly significant in the ancestor rituals. It is believed that Aadi Amavasya marks the initial descend of Pitrus to the earth plane seeking oblation from their lineage during Mahayala. So, observing Aadi Amavasya denotes extending a warm welcome to our ancestors onto the earth plane.

These pitru Devatas had a manasik daughter (daughter born from Chitha-mind) by the name ‘Aaccheda’/Achhoda who was a pious person and had said to have performed years of penance. She was fascinated by ‘Amaavasu’, one of the pitru ganaas, and Aachheda Kanya fell in love with him. Because of this sudden aberration of her thoughts and mind, she was eliminated from the Celestial realm and fell into Bhuloka. Since then, the day that Aachheda fell off to Earth was known as ‘Amavasya’. She performed an intense penance towards Pitru Devatas after reaching the Earth; pleased with her devotion.

Devatas blessed her a boon that Amavasya would be their favorite celebration for Pitrus; they would bless ancestors of any family that is offering sincere rituals- Tarpanam. In addition, she was also offered a Divine Sankalpa that She would give birth to Maharishi Vedvyasa. As per the boon, Achhoda was born in the 28th Dwapara Yuga in the womb of a celestial fish and named Satyavati. She gave birth to Maharishi Vedvyasa through divine Sage Parasara. She later married King Shantanu from the epic Mahabharatha. 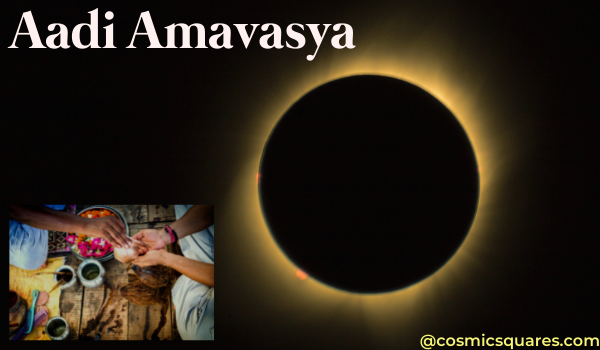 According to another famous legend, when King Karna died on the battlefield and moved to swargaloka-Heaven, he was given gold and other precious metals to consume as food. Perplexed Karna met Lord Indra to understand the reason. He replied that though King Karna was the most generous king ever lived, he had only donated gold and other material comforts to people. He never offered Pinda dhaan-food to his ancestors.

Karna explained that he has no knowledge about who his ancestors were, which stopped him from performing the rituals for his ancestors. On hearing this, Lord Indra permitted King Karna to visit the Earth on Amavasya days and 15 days of Pitru Paksha period to offer Pinda dhaan and perform Tarpanam to his ancestors.

Shravana masa or Aadi Masa is an auspicious month where massive divine energy descends on the Earth plane. On Aadi Amavasya, planets Sun and Moon occupy the same sign. Sun signifies Father and Higher Soul or Atma, and Moon represents Mother and inner Mind. These planets occupy Moon’s sign Cancer on this day. This enables a conducive energy field for ancestor rituals, making this day ideal for Tarpanam for lost souls. According to Mahabharata, a Human Soul is a speck that carries elements of bigger units from the Holy Trinities, i.e., Divine Light/Creation- Brahma, Divine Love– Lord Vishnu and Divine Power- Lord Shiva, after leaving the physical body on this Earth plane the soul fulfills Shiva and Vishnu elements.

The third element, the Divine light of the soul, does not always reach the Brahma state. This is where we catapult divine energies/divine light to that soul to reach Lord Brahma. Various cultures follow Tarpanam in their own way, some follow rituals to impart energy to the souls, and in some other cultures, they pray to the Supreme Lord to fill their ancestor souls with light to attain the supreme state.
The presiding deities of Amavasya are the Pitru Devathas. Lord Shiva, Goddess Kali, Lord Narasimhamurthy, Lord Hanuman and Planet Saturn are also powerful on this tithi, and tantric remedies are performed.

Devotees begin the day with a holy dip in a sacred river or at home. A few sesame seeds dropped in the bathing water make it holy. The worship altar is cleaned and organized for pooja. People visit the water bodies of the temple or lakes to perform Tarpanam. People prefer Rameshwaram or other powerful Lord Shiva temples for the rituals. Freshly prepared food is offered in the form of Pind Daan (rice balls with sesame seeds). People fast the whole day or break their fast after sunset with a simple sattvic meal. Feeding crows on Amavasya is considered auspicious, as it is believed that the ancestors descend to the earth plane in the form of crows to accept our offerings. People also make charities to the poor and needy.

Hariyali or Aadi Amavasya is well celebrated in the Southern parts of India. People gather in large numbers at some theerthas to perform Tarpanam. Some of the important sacred spots or theerthas are Agni Theertha in Rameshwaram, Triveni Sangamam in Kanyakumari, Triveni Sanga of Cauvery river in Karnataka.