Aadi pooram or Andal Jayanthi is celebrated on the Pooram or Poorva Phalguni Nakshatra of Aadi/Shravana Month. This festival is a significant celebration in South India, especially Srirangam. Shri Andal is one of the twelve Alwars and is believed as an incarnation of Goddess Lakshmi. Always are devoted Vaishnavaites who played a major role in spreading Vaishnavism.

Andal, Kodhai, or Bhudevi is an important Alwar saint raised by Periyalwar. Periyalwar was living in Shrivilliputhur. This Vaishnava saint had no child of his own and prayed to Shri Ranganathar of Srirangam for a child. Pleased with his sincere plea and devotion, Goddess Lakshmi appeared in the form of a newborn baby alongside the temple. Periyalwar found this baby girl and decided to raise her as his own. He named her Kodhai. She was raised in the Vaishnava tradition, worshipping Lord Vishnu and reciting His slokas. She was very devoted to Shri Ranganathar, and Her love knew no bounds that She started to wear the garlands before offering it to the Lord. One day, Her father Periyalwar noticed this and rebuked this act of Hers. She rebelled and expressed Her wish to marry the Lord. On the same night, Lord Vishnu appeared in Periyalwar’s dream, saying that He wishes to wear the garlands only after Andal wore them. She must visit the Srirangam temple, acknowledging Her love for Shri Ranganathar. Periyalwar was amazed by this dream. Following the Lord’s words, he took Andal to the temple. At the temple, to his surprise, Andal walked right into the inner sanctum and merged one with Shri Ranganathar.

Andal has written the most important literary works of Vaishnavism, Thiruppavai, and Nachiyar Thirumozhi. Thiruppavai is a divine composition sung during Aadi pooram and Maargazhi Bhajan. 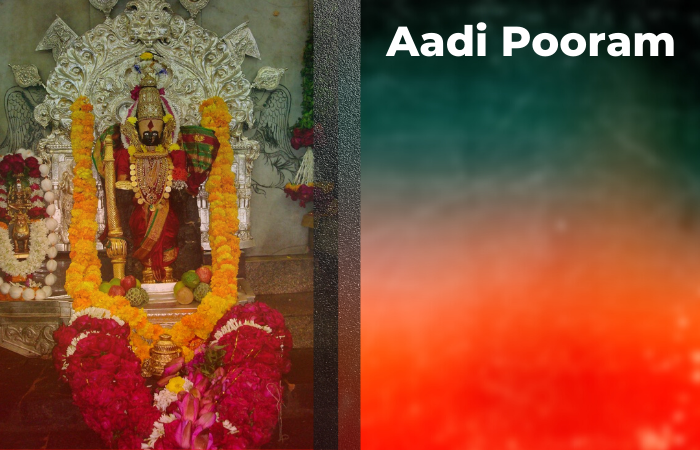 This pooram is also celebrated as a festival of baby showers marked by offering new bangles to the universal mother. There is folklore associated with this celebration. In a grand festival celebrated for Lord Shiva and Parvathi in Trichy(Tamilnadu), a pregnant woman was in the devotee’s crowd. When the event ended, she started going into labor all of a sudden. There was nobody around to help her. She screamed for help and began fainting; Goddess Parvati appeared to her rescue. She disguised herself as a midwife and assisted the woman in childbirth. From this event, Aadi pooram is also celebrated as the Valaikaapu ceremony.

Andal is the epitome of sheer devotion and limitless love for Lord Vishnu. She is the youngest girl to attain sainthood in Vaishnavism. Her literary works resonate Her dedication to the Lord and the magnanimity of Lord Vishnu. This festival is celebrated for 10days in Srirangam and culminates on Aadi pooram on the eve of Andal marrying Sri Ranganathar. People facing challenges in finding a compatible marital partner or in the marriage life can worship Andal on this day for remedy. Couples facing issues with progeny can also worship Andal for a cure.

Homes and special poojas are organized on this day to appease Goddess Andal. All the Goddess idols in Shakthi temples are worshipped and decorated with new bangles. These bangles are later distributed among all the devotees. It is believed that wearing these bangles blesses good progeny and protects pregnant women from evil forces. People gather in groups and recite ‘Thiruppavai’ and ‘Lalitha Sahasranamam.’ We can offer red clothes, lotus flower/garlands, and Kumkum to Andal idol. Neivadhyam, like Kalkandu rice, tamarind rice, lemon rice, sweet Pongal, curd rice, and soaked moong Dal-Kosambari are offered to the Goddess.