Ascendant or Lagna describes which zodiac sign was ascending the eastern horizon at the moment you were born. Imagine your Birth chart as a screenshot of the cosmic space at the time of your birth, each sign/unit in Vedic astrology describes where a planet or celestial body was when you were born. To be precise, Ascendant is the sign that rises in the East at the time of one's birth. Because of this, Lagna is often referred to as "Rising Sign." 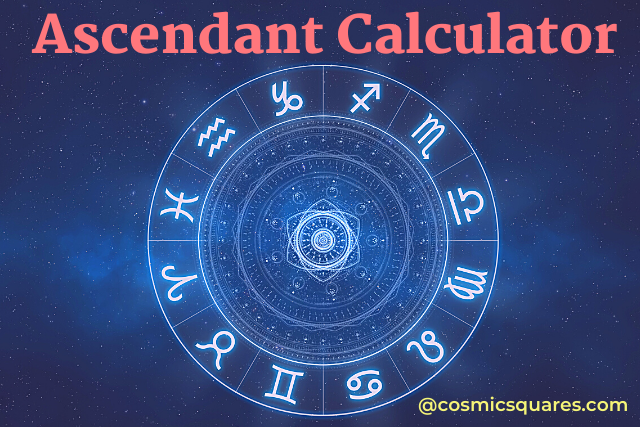 To understand ascendant, we must first know houses in astrology. "Houses" divide the horoscope or one's birth chart into twelve sections. A Zodiac sign or Rashi is assigned to each house. In Vedic astrology, the affiliation/connection between the celestial bodies in the cosmic space highly influences an individual's constitution, physical and energy(Sukshma). The houses are derived from the view from the earth plane.

Earth completes one full rotation in 24 hours. In this movement, houses capture different locations of the Zodiac signs at different points in times. According to this movement, the first house is the starting point, the ascendant. The ascendant sign can be any Twelve moon signs - depending on the time and place of birth.

As we all know, the Zodiac Belt has 12 Signs. One of them will always arise on the eastern horizon and are measured 30 degrees each. Ascendant or Lagna is also 30 degrees. The degree of the Ascendant is very important in judging the strength. So, the 30 degrees is divided into 5 intervals or states of 6 degrees each. The five states and their corresponding degrees for Odd are listed below, and for Even moon signs are reversed.

The degree of the Ascendant becomes the most prominent point of every single house based on the planet. Any planet which is at a degree close to the ascendant degree becomes strong a can give full effects during its dasha, and the planet must be within 3 degrees on either side of the ascendant degree.

Given below Birth Details for the following input:

Your Ascendant is Sagittarius

Sagittarius Ascendants are adventurous, love new experiences, possess absolute faith and enthusiasm. Grand plans, big promises, and willingness to explore and experiment are the key strengths. You often are seen as restless because you are always looking for something that is just out of grasp all their lives. You have opinions about everything, and you love sharing their opinions with a strong sense of humour. In relationships, you are good at expressing yourself and voicing out their needs. Their sarcastic approach might cause challenges if one fails to see underlying hope and love for living a life king size.

What is the Significance?

Your Ascendant determines the way others perceive you and your expectations from the world. It directly influences your social personality. Your reaction to every action around you is related to the zodiac sign that was on the Eastern horizon when you were born. So, Vedic astrology refers to Ascendant as a "mask" that people wear since it defines your first impressions among people and your primary reactions and responses.

Ascendant represents your physical body and lifestyle. It helps you understand the physical stature, gestures, temperament, social network, and physical constitution of an individual. It is a manifestation of both inner and outer worlds; bringing Ascendant's nature into self-awareness can help you create a lubricative life on the earth plane.

Being mindful of your Ascendant/Lagna's strengths and challenges facilitates a great emotional balance towards overall life and understand the type of energy that drives your incarnated soul.

How to calculate your Ascendant?

Ascendant is the degree of the zodiac sign that was highest on the Eastern horizon at the time and place of an individual's birth. Ascendant changes every two hours. This makes it so important to have an accurate time of birth when interpreting a birth chart. It's easy to calculate your rising sign with our Lagna Calculator. All you have to do is type in your birthday, time of birth, and location of birth. Boom, your birth chart with all important details will be displayed.