Manglik Meaning - What is Manglik Dosha?

In Vedic Astrology, certain planets, when placed in certain houses in one’s birth chart, can be super-beneficial (Yoga) or highly malefic (Dosha); ill-placements of certain planets can cause inauspicious effects and its referred to as Dosha. Planet Mars positioned in ascendant, second, fourth, seventh, eighth or twelfth house from ascendant, moon and Venus in a birth chart creates Manglik Dosha. Mangal is the Sanskrit name of Mars. Manglik Dosh is one of the much-feared astrological afflictions. This Dosha has various names, Mangal dosha, Mangala Dosham, Kuja Dosha, Bhom Dosha, Chevvai dosham or Angaraka Dosha. People who are born in this planetary placement are Manglik. The position of Mars in the birth chart is analyzed for marriage. This Dosha plays a major role in considering marriage compatibility. 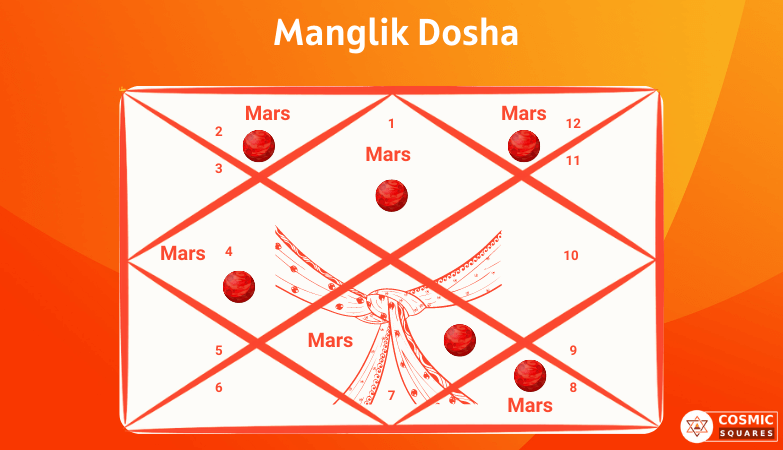 What is Planet Mars in Vedic Astrology?

To understand this Dosha better, we must know about Planet Mars. Mars is a fiery, aggressive, strong planet. It takes 1 year, 321 days, and 32 hours to complete one full orbit. Planet Mars is a Commander In Chief in the celestial cabinet. It has a great fighting ability and behaves like a soldier. Mars is very impulsive; it might attack its enemies without thinking much or strategizing the move. Natives influenced by Mars will possess all these attributes. Mars represents physical force and gives vitality, courage, and ambition, making its natives unreasonable, irrational and intolerant. Mars represents electricity, chemicals, weapons, bravery, aggression, and high energy fission/fusion reactions in the three-dimensional life on the earth plane.

Get Your free Unique Mangal Dosha Analysis based on Your Kundli and birth details. This calculator for Manglik Dosha check provides accurate results as per Vedic Astrology rules. All you have to do is fill in your birth details in the tool to check if you have Manglik dosha in your Kundli. Using the software, you can check the manglik type, kuja dosha impact and percentage.

The Manglik dosha, which is popularly known as ‘Mangli’, is very inauspicious. Scriptures describe the very dangerous effects of Mars Dosha. The position of Mars in various houses affects marital life and happiness. Mars is a slayer of the married life when placed in these houses. The negative impact of Mars varies based on these 5 houses. It can cause a mild delay or obstruction in marriage; it can also afflict to such an extent, that a Manglik may remain unmarried throughout their life, may get widowed or may have to face problems related to the death of their spouse. This dosha has varied impacts on its natives. They will be self-centred, fiery, aggressive, bad-tempered, ill-treat their life partners, have poor financial status and mental instability. It can also cause divorce or separations

Effects of Mars when placed in various houses

Mars in the Ascendant

Mars in the 2nd house

This house is the significator of wealth, joy, immediate family and relatives. A malefic Mars affects the relations of a native with his or her family members. There may be a constant indifference and anxiety between the couple. These aspects of Mars can cast negative instincts in children of the native as well. Both personal and professional life gets serious disturbances.

Mars in the 4th house

Mars in this house provides stable wealth to its natives, but personal life gets challenging. It has adverse effects on the happiness quotient of the native’s professional life and will keep them dissatisfied with their job, causing frequent job switches. The native may develop uncompromising nature. Mars in this house does not risk the life of its natives.

Mars in the 7th house

The fiery planet will manifest as a short temper in their natives. They will be dominating, pushy and impose his opinion on others in the family, leading to misunderstandings and domestic conflicts. They suffer from low income and problematic married life. It causes delay and obstacles in Marriage. Results in painful Marriage life.

Mars in the 8th house

Mars in the eighth house makes the native lazy. The 8th house is the significator of longevity, joy, sorrow, and incidents of life. Mars is very harmful in this house. They will have erratic moods; they remain calm and composed once and lose temper suddenly for baseless reasons. Mars in the 8th house can cause their life partner to leave the family life. The native’s married life is affected due to his ill health. The native could be prone to accidents when Mars is in this house.

Mars in the 12th house

The 12th house is the house of happiness, travelling, relaxation, expenditure and material indulgence. There will be a lack of love, compassion, care and sympathy between the couple. The native’s family goes through a bad economical state. There is a tendency to hurt the life partner. The native suffers from hidden genital diseases. They might involve in immoral activities and have extramarital relationships.

Vedic astrology provides solutions to every astrological condition to mitigate the ill effects of planets. For Mangal dosha, the most common remedies that a Manglik can do to get rid of the dosha effects are,

Benefits of being Manglik

When someone is manglik, people often assume the worst things about marriage compatibility, health and longevity of the native. Most extreme fears about manglik dosh are often misconceptions on the dosha. But, there is also a positive side to being a manglik. Mars’s influence on the manglik can bring out some best attributes and auspicious blessings. Popular advantages of manglik impact are being goal oriented, well disciplined, sincere, high energy levels and deeper intuition. Mars in mangal dosha also blessed great career and never give up attitude. Even in the most difficult situations, manglik natives have the potential to emerge victorious against the odds.

Manglik dosha is gender neutral. A girl with Mars in the above mentioned houses is said to have manglik dosha. Mars affects the girl’s characteristics, nature, social behaviour, marital life, and career. Manglik dosha in girls results in high martian energy. They channelize this high levels of martian energy as self confidence, impulsive nature and independent attitude. They do not depend on others for their basic needs or opinions, they do what they feel is right to them. When martian energy is channelized in a poor way or destructive way, it can hurt the personal life and professional life of the native. The manglik girl in that case may have to rely on others for everything or lack self confidence.

Both men and women could be manglik. A boy with Mars in the houses - first, second, fourth, seventh, eighth and twelfth is manglik. Manglik boy (men) have high energy levels, intolerance towards injustice, well built physical body and warrior like mental strength. They also exhibit strong martian personality. This dosha, under extreme affliction can make the Manglik boy irrational, aggressive, and irrational. They may have volatile temperament and fragile ego. Mangal dosha affects many arenas of the native’s life- friends, career, mentality, health, and marriage. Read in detail to know more on manglik boy.

Many birth charts have Mangal Dosha, but in most of them, Dosha is cancelled due to various combinations of Mars and other planets based on their house positions in the horoscope.It is believed that a Manglik should only marry another Manglik, the idea being that two negatives cancel each other out, creating a positive.

If you are a manglik, you might have come across this statement quite often that ‘Manglik Dosha ends after 28 years of age’. Some expert astrologers say that Mangal dosha energy dissipates after 28 years of age. When manglik natives reach 29th year of age, they display maturity and has figured ways to channel their martian energy in productive ways. Though Mangal Dosha in the horoscope does not actually end after 28 years of age, the dosha effects are greatly neutralized. This applies to both men and women with manglik dosha.

Can a Manglik Marry a Non Manglik

This is one common question asked to any astrologer when consulted for matrimonial ashtakoota match for both mangliks and non mangliks. While many astrologers frown upon the idea of manglik marrying a non manglik, there is also equal strength of experts who advocate manglik marrying a nonmanglik. In Vedic astrology, the answer to this highly depends on the Mars’s house in the chart, position of other benefic planets, and aspect from malefic planets and much more factors. In short, there are ways and remedial rituals that allow a Manglik to marry a non-Manglik.

Just like common people, there are many celebrities and renowned personalities who are manglik. In some cases, their success is attributed to manglik dosha. As we have listed the benefits of manglik under the benefits of manglik dosha, these celebrities are living examples of how mangal dosha in real life can uplift someone to glory. Many world leaders, politicians, thought leaders, movie stars, and rebels are known to be manglik. Some popular examples include, Jawaharlal Nehru, Narendra Modi, Martin Luther King, Nelson Mandela, Fidel Castro, Bill Gates, Aishwarya Rai, Anushka Sharma, Kapil Dev, Virat Kohli, Pele and many more. These mangliks have tasted greatest victory possible in life. Some of them have married mangliks and some married non mangliks which again proves manglik- non manglik marriages can be successful too. Read further to know more on who married non manglik and how successful they are

In India, there are many grand sthalas and power spots for manglik dosh nivaran puja/pooja dedicated to mitigate Mangal dosha impact on mangliks.

Manglik Meaning in other Languages