There are many kinds of manglik dosha based on the placement of Mars and other planets that aspect Mars. These doshas have different effects on the life of the native. In certain cases it is very mild and in some cases it's quite extreme affecting all areas of native’s life. All this is applicable only when the manglik dosha is valid and is not cancelled by other planets or conjunction in the horoscope. 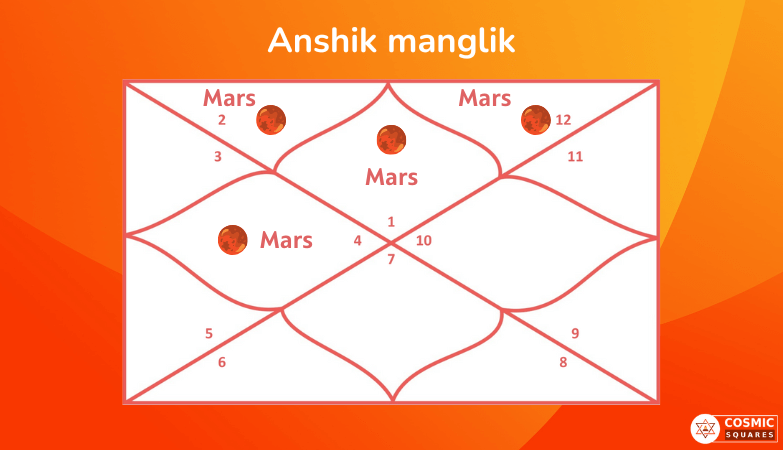 Anshik Manglik boy might face unnecessary conflicts or fights with their friends or acquaintances. They generally have many enemies in their surroundings mostly due to their aggression. When not channeled well, the Anshik Manglik may suffer from low self confidence and low self-esteem. Presence in the second house can hurt their maternal chord and leads to mild disharmony in family. Their love interests can betray them. Anshik Manglik boy with Mars in the fourth house may be dissatisfied with his job or family business. They may have some childhood physical scars due to arguments of violence and physical assault. Anshik Manglik person might not able to withhold their paternal property. Anshik Manglik boy may face financial problems and mental health or emotional instability issues if Mars in the twelfth house. Positively, the native with well channelized Martian energy means extraordinary tolerance of pain, deep focus, humongous self esteem, and intolerance to injustice.

Anshik Manglik dosha ends at the age of 18. until that age, they may experience some turbulence with family, friends or health. Anshik Manglik girl with Mars in the twelfth house may face emotional and health obstacles due to family or profession. Anshik Manglik girl can dominate the family or friends circle that often lead to arguments. They may come in company of evil friends or bad influences affecting their childhood. Anshik manglik girls with Mars in ascendant can display anger or rage in their actions. They might be perceived as hostile due to the martian energy. Anshik Manglik individuals especially girls tend to face a problems in choosing friends and love partners. When Mars in the second house, it can impact their family bonding, maternal relationships or education. 12th house presence can pose some mild challenges in the financial status and mental health.

Many expert astrologers advice that Anshik Manglik is a feeble to mild form of manglik dosha and natives can perform simple remedies to alleviate the dosha effects.

Placement of mars in certain houses of horoscope decide whether the native is under anshik manglik dosh or not. The popular myth about marrying a Manglik is that the spouse’s life remains at risk all times. When appropriate dosha remedies like Anshik Manglik Ghat vivah or kumbh vivah are incorporated, marrying an anshik manglik does not hurt their marital life or spouse's health. In case of Anshik manglik since the effects of the dosha are less and does not impact marital life there may not be challenges with spouse. In some cases, when the non manglik’s chart has yogas and benefic planetary positions, it can cancel out the anshik manglik dosh in the manglik chart. At the same time, it is very important that the marriage horoscope matching - Ashtakoota is performed even before checking for manglik dosh effects. A mismatch in ashtakoota does not qualify for marriage compatibility.

What is anshik manglik ?

When Mars is placed in the houses- first (ascendant), second, fourth or twelfth in a native's birth chart. This native is called Anshik Manglik.

Not all the times. Mostly Anshik manglik dosha effects are predominant in native’s attitude, profession, health, and family relations.

Can Anshik Manglik dosha be removed?

Can a boy be an Anshik manglik?

Yes. Both men and women can be Anshik manglik. This dosha is gender neutral.

Can a non manglik marry an Anshik manglik?