Can a Manglik Marry a Non Manglik

This is a popular and one of the most feared questions for Marriage in Vedic Astrology. It has also been a source of constant debate! In India, there are many myths and taboos associated with this question. Most parents do not consider a nonmanglik match for their manglik children or avoid manglik matches if their children are non manglik. Though there is some level of truth involved in these myths, a manglik marrying a non manglik is definitely a possibility in vedic Astrology. Read ahead to know how! 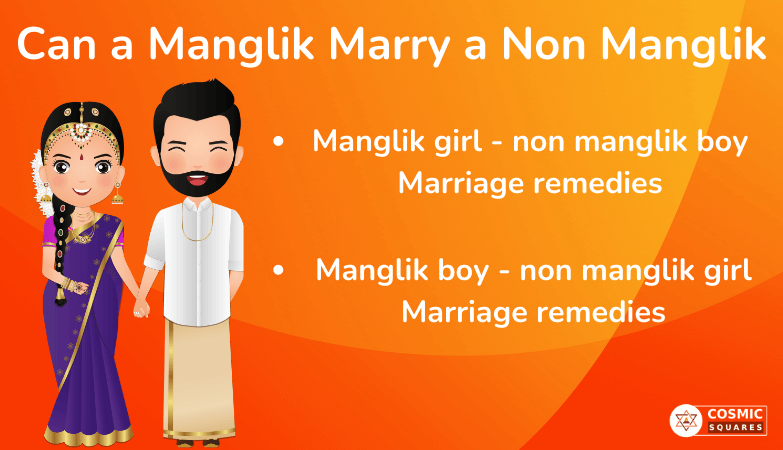 Who is a Manglik?

When Mars is placed in 1st, 4th, 7th, 8th or 12th house in a horoscope, it makes a native exhibit the highest degree of Martian energy, like passion, aggression, and rage. This person is often referred to as a Manglik and it is considered as a Manglik dosha (दोष). Mars when placed in any of these houses greatly alters a native’s temperament, nature, undue desires, assertions, and sexual energy.

7th house is called the house of marriage and marital partner. This house is analysed for marital relationships. When Mars is posited in 1st, 4th, 7th, 8th or 12th houses, its aspect on the 7th house creates numerous challenges in the marital life. Mars’ aspect on this house deeply affects the marriage and their partner as well. 8th house, Ayu Bhava also called the house of death will also be affected by Mars in a manglik’s chart. Since both these houses related to marriage will be under Mars’s strong influence for a manglik, as a thumb rule, they should only marry another manglik. When both the boy and the girl are Manglik, it cancels the dosha and presents successful conjugal bliss.

In Vedic astrology, there is a solution for everything. A manglik can marry a non manglik based on the position of other planets and yogas in their chart and remedies prescribed in the Vedic texts. The foremost factor in any marital match is checking Ashtakoota matching which comprises of 36 gunas/ attributes between the groom and bride. This match is first analysed in Manglik and non-Manglik individuals, then the following conditions are verified before proceeding for marriage

Remedies for a manglik to marry a non-manglik

Moreover, with the remedies suggested in the Vedic scriptures, a Manglik can get married to a non-Manglik even if the above said planetary conditions do not apply. Here is the list of remedies that can be performed both before and after marriage to mitigate the effect of Manglik dosha,

In cases where the girl is Manglik, and the boy is non-manglik, the fear factor is widowhood. Loss of the spouse is predicted in malefic planetary positions. The most popular remedy to nullify the dosha in this case is ‘Ghat Vivah’ (घट विवाह). This remedial ritual also removes the widowhood from their life. This remedy involves the manglik girl marrying a peepal tree or an idol of Lord Vishnu or a clay pot filled with holy water like Ganga Jal or temple theertha as her groom. This is treated as the first marriage of the bride. After the marriage ritual, a tiny branch of the tree is chopped or the idol of Lord Vishnu idol is floated in a river, or the matki pot is broken. The actual marriage where the girl marries the non manglik boy is considered as a second marriage or remarriage. In the natal chart, remarriages are analysed using 9th house. In this scenario, Mars in houses- 1, 4, 7, 8, or 12  will not have any influence on the house of marriage and house of death.

There is another remedy in place to mitigate the manglik dosha using coral gemstone. This remedial ritual is perfomed during Kanyadhaan (कन्यादान) of the marriage ceremony. Two coral gemstones approximately of same dimensions are used in this remedy. During kanyadaan, these two corals gems are placed inside the right palm of the bride. Her father or a paternal relative, in case of absence of the father is asked to pour water on her right hand washing these corals, while she holds one in her hand and lets the second coral drop into a vessel. The first gemstone is worn as an ornament, like a ring or pendant, throughout her life. This remedy saves her possible misfortunes of Manglik dosha. The second gemstone is offered to a temple or discarded in a waterbody.  In the future, if the gemstone is lost or misplaced, it must be bought and borrowed from her parents or paternal side without repeating the ritual.

Similarly, when the boy is Manglik and the girl is non-Manglik, same marriage (विवाह) ritual is performed by the manglik boy. Instead of peepal tree, kikar tree or a kikar tree branch is used in this remedy. The manglik boy marries this tree or a clay pot and this is treated as his first marriage. Post marital ceremony, the kikar branch or the clay pot dropped in flowing water streams

Can a manglik marry a non manglik?

Yes, manglik can marry a non manglik.There are remedies based on the native’s chart that can facilitate the marriage.

Can a manglik boy marry a non manglik girl ?

After checking the kundali and performing the remedies suggested by an expert astrologer, a manglik boy can marry a non-manglik girl.

It does not always cause negative effects. The results are highly based on the planetary positions in the charts of both boy and the girl. With robust planetary combinations, the marriage can be a success.

Which gemstone is used for a person with manglik dosha?

Coral gemstone is prescribed. It is also used as a part of marriage remedies for this dosha.

Can a manglik girl marry a non manglik boy ?

After thoroughly analyzing the charts for ashtakoota and determining the potency of manglik dosha along with remedial rituals, a mangalik girl can marry a non-manglik boy.