Many famous personalities around the globe are manglik. Surprising right?? its true! Mangal Dosha or Manglik Dosh is one of the most feared doshas in Astrology. People have been told that being a manglik is a curse and their marriage life will be troublesome. Many of these talks are just myths; there are many positive shades Manglik dosh.

You might have heard about many successful matrimonial stories of Manglik and Non Manglik personalities in both India and outside of India. If everything said about negativity of Manglik dosh is true, these success stories wouldn’t be possible. Read further to understand more about manglik celebrities and marriages. 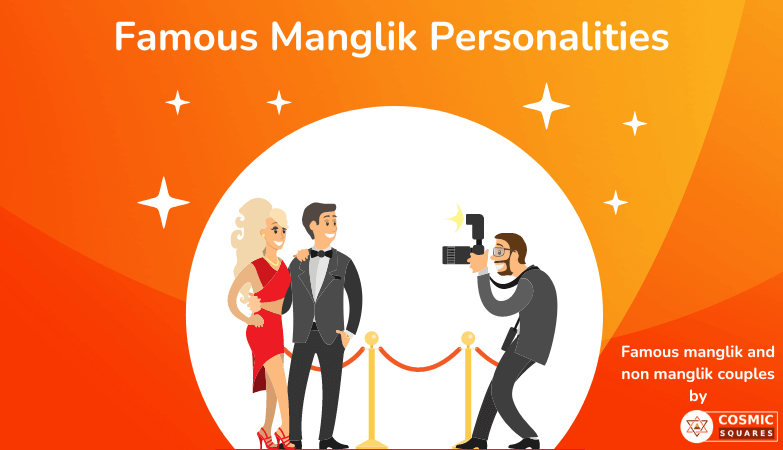 Manglik Personalities From Across the World

Mangliks are known for their strong and aggressive personality. They are fond of adventurous things in life and have great zest for living life, king size. Their hot, fiery temperament makes them vibrant. With their passion for discipline and rules they can stay highly focused on things they set their eyes on. In many ways, Mangal or Mars holds great role in their success. Mars makes them charming and enables them to stay exuberant in the way they approach life.

A Manglik native does not always have to marry a manglik. There are many exceptions to this based on planetary positions in their natal charts. A manglik can also marry a non manglik native. Many Vedic remedies are also available to facilitte manglik- non manglik marriage. Popular bollywood couples like Aishwarya Rai and Abhishek Bachchan, Deepika Padukone and Ranveer singh, Sonam Kapoor and Anand Ahuja, Katrina Kaif and Vicky Kaushal, Varun Dhawan and Natasha Dalal, Sonakshi Sinha and Bunty Sajdeh are actually Manglik Non manglik couples. They have been under the astrological radar for a quite a long time and make great examples of successful manglik  non manglik matches. A manglik can perform any of many remedies suggested by Vedic texts under the advise of expert astrologers to eliminate negative effects of mangal Dosh from their marital life.

The unique nature of mangal dosha is that when one manglik marry another manglik it is believed to cancel the dosha. When two Manglik people marry each other provided their ashtakoota matches, the negative effects of Manglik dosha is removed from both the bride and the groom. They will lead a blissful married life with materialisic success.

Eight categories of attributes are checked for matrimonial horoscope matching; these ashta- eight and koot- categories determine the compatibility between the couple. The Ashtakoota are,

Varna – Matching of the community or sect

Vashya – Attraction in the relationship

Gan – temperament and the core nature of each other

Bhakoot – Relative influence of each other in the marriage life

Nadi – Genetic ability to bring a child on earth.

Here is the conclusion, when you are a manglik always check if the dosha is true or gets cancelled due to planetary exceptions. If your dosha stands true, check the potency of the manglik dosha from your natal chart, then perform a strict Ashtakoota matching for matrimonial match, circling back to the manglik dosh effects only after ashtakoota match is the perfect way to decide on marriage for a manglik native. We never know until we actualy know! You could be an addiiton to one of the above listed couples 🙂