As there are two sides of every coin, Manglik or Mangal dosha also has two sides based on its effects on the native. Mars is a fiery planet mostly known for fighting and war. When a native has a predominant Mars in their chart in these houses- 1,2,4,7,8,12 they may either exhibit ability to fight injustice or be a cause of injustice. This duality with Mars’s effect on the native can be determined after analyzing the horoscope.

Mangal Dosha are also of two types based on the placement of Mars and its effects: 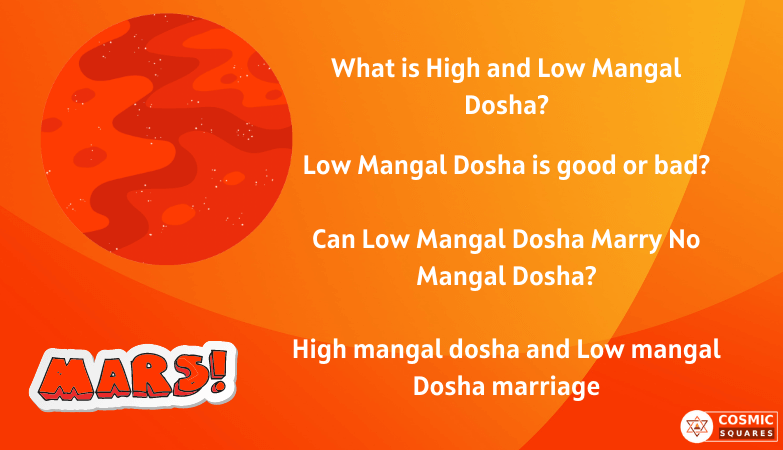 Placement of Mars in the houses seven and eight is called high mangal dosha. Shuka mangal dosha wherein the Mars is placed in 7th or 8th house from Venus in the chart is also termed as high mangal dosha. Shukra Mangal dosha has the extreme impact on the native since Venus ruled love life and material pleasures making this ‘High Mangal Dosha’. High manglik dosha affects various dimensions of life. For instance, its very hard for a purna manglik to feel relaxed. They feel a constant influx of energy in them that keeps them busy or threads too many thoughts in their mind that affects their sleep. People born with high Mangal Dosha are not open to any feedback. They cannot take even constructive criticism and immediately jump into arguments or fights.

Most Vedic scholars say that High Manglik dosha due to houses 7 and 8 are extreme because of its possible damage to marriage, spouse, physical and emotional relationships. As both the houses are connected to conjugal bliss, spouse, reproductive organs, marital ties and even health conditions associated with the unison, the ill effects are often for the whole lifetime. There may be sexual incompatibility, issues in progeny, for women there can be health issues pre and post childbirth that hinder with marital life. Most extreme impact being multiple marriages due to sudden death of spouse or broken marriage due to physical violent abuse. When the high mangal dosha is pavagrahas like Saturn, Rahu or Ketu it can lead to permanent disability through accidents, injuries from weapons or theft.

Mars when placed in ascendant, second, fourth or twlefth houses it results in low mangal dosha. Lagna mangal dosha and Moon Mangal dosha have mild to medium effects, so this dosha can also be grouped into ‘Low Mangal Dosha’.

The general effects of having Mars in these houses in a horoscope can impact your personality and career choices even finances. possessors of Mars’s energy though Mangal Dosha are subjected to unnecessary stress and agitation even for the slightest or insignificant matters. They display intolerant and impulsive behavior patterns related to friendships, finances and business. These natives overflow with martian energy when employed in constructive ways they go great heights in fields related to armed forces, motor-sports, agriculture, weaponry. Most ill-effects of Low manglik dosha are limited to themselves very rarely they become a reason for discomfort or disharmony in the family.

Having any form of Mangal Dosha is not a desirable phenomenon in a horoscope. It is because most effects from this dosha are dynamic and has different impact on the native. Low manglik dosh can be both. In most cases, the Low mangal dosha effects are prevalent to native’s personality, attributes, finances or profession and marriage prospects or marital life remain unaffected. Being said that when Mars is strong in personality or finances in a not-so-constructive ways, the native may exhibit little too much Martian energy that can be difficult for people around them to function. Yet there are remedies prescribed in Vedic Shastras to mitigate this dosha effects and to neutralize high impact that a native has to perform all their lifetime to live a peaceful life and to enjoy just the constructive attributes of Mars.

Natives with same type and intensity of Mangal dosha can get hitched without any problems given ashtakoota match also shows over 27 gunas. However, when one of them has High Mangal dosh and the other has low mangal dosha then marriage prospects rely on many factors. After ashtakoota matching, based on the deep analysis of horoscope of both the natives for possible cancellations for manglik dosha and remedial rituals, marriage can be decided. However, a person with severe manglik dosha has to only marry another manglik with similar intensity of manglik dosha since severe Mars in 7th and 8th house aspects houses of family life, marital life, health of the spouse, and maraka sthana. Since Mangal is a fiery planet, people under Mars’s influence are mostly short tempered and volatile. Their impulsive nature also assumed as hot-headed that leads to temperamental issues. This agitation makes high mangliks quite difficult to manage in both family life and marital life. Only another manglik with similar attributes is strong enough to withhold the storm from the manglik.

What is Low Mangal dosha?

When Mars is placed in houses first, second, fourth or twelfth, it is called Low Mangal dosha. This dosha affects personality, immediate family and health.

Generally, Low mangal dosha has mild to moderate impact on the native. Some astrologers call this type of dosha good since it does not impact marriage and spouse’s health unlike high mangal dosha.

What is high Mangal dosha ?

When Mars is placed in houses seventh or eighth it is called High Mangal dosha. This dosha primarily affects marriage, self and spouse’s longevity, mental health and finances.

Mostly, the effects of low mangal dosha are limited to personality, finances, family and mental health of the native. Marital life hardly gets impacted in low mangal dosha.