Manglik dosha is formed when planet Mars in placed in the 1st(ascendant), 2nd, 4th, 7th, 8th or 12th houses in the natal chart. The word Dosha translates to defect in Sanskrit and mangal dosha effects is closely associated with rigid behaviour, aggressive nature, delays in marriage, disputes or separations in marital life, and troubled marriages. 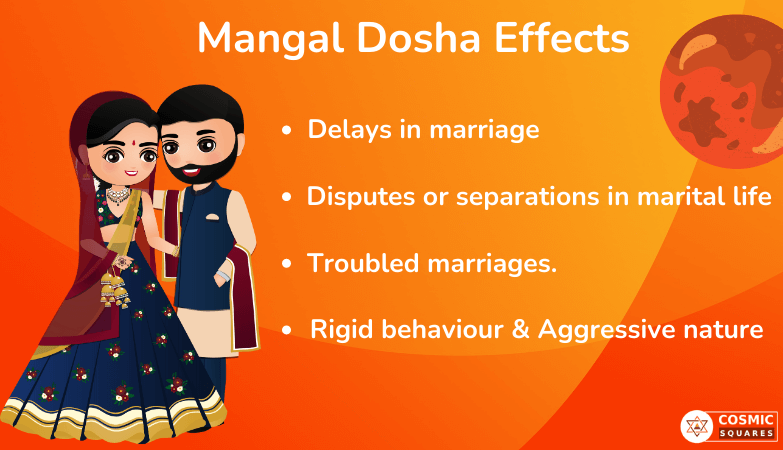 What are the Effects of Mangal Dosha

These natives are said to be under strong influence of this war planet. Mangal or Mars affects all arenas of the native’s life. Unless there is a benefic planetary combination with Mars in these houses or aspect from benefic planets,  Mars can extend its extremities into native’s traits, career, marriage, discipline, and health.

The most common manglik dosha effects based on the house are,

Mars as a hostile planet, in the Mangal dosha works unfavorable for marriages and even life after marriage. The impact of mars is said to be much high especially if a Manglik native gets married to a non- Manglik without ashtakoota match; it may numerous negative impacts in the relationship. Results of mangal dosha are quite obvious on the marriage. It creates unknown obstacles and hindrances. Based on the position of Mars and other planetary positions, it result in delays in marriage, denials from prospective matches despite handsome or beautiful looks of the native. of marriage, death of spouse, ill-health of spouse, hardships in the life of spouse, break of marriage etc. Their emotional and physical relationship with the spouse might will be satisfactory or fruitful.

In some cases, even when the native is involved with a lover, the marriage might delay or might not happen end in marriage. They could break it off with their lover and mope over their broken love life throughout their lifetime.

Vedic texts mention “bharya bhartr vinashyati, bhartr bharya vinashyanti” meaning, manglik dosha destroys the groom in the horoscope of a bride; and it destroys the bride in the horoscope of a groom. Mangal dosha is known to increase the violence or aggression in the native resulting in divorce/separation in marriage. Inherent aggression is indicated by Mars in Manglik dosha. There are feeble chances that the mangal dosham might remain unexpressed due to the benefic yogas and planetary positions.

Native with Mangal dosha receive aspect on 7th and 8th houses, the house of marriage and spouse from Mars placed in the houses, 1st, 2nd, 4th, 7th, 8th or 12th houses. Mars aspect on these houses of marital life can severely affect the native’s marital life. However, Second marriage is seen or analysed from the ninth house of the horoscope. Mars does not aspect 9th house, which means second marriage of the native goes smooth. This is why the popular remedy called Ghat Vivah or Kumbh vivah is performed as a manglik’s first marriage and their actual marriage becomes the second one with no influence of Mars. So second marriage is deemed successful in many manglik marriages.

In logical terms, when a manglik goes through legal separation from their first marriage due to Mars, they might fair well in their second applying all the lessons learnt from the first. However, this success of second marriage completely depends on the individual.

How to Reduce ill Effects of Mangal Dosha

When Mangal Dosh is present in your horoscope, it can cause problems in many areas of your life. Vedic astrology suggests many powerful remedies to reduce the ill effects of Mangal dosha.

Due to the extreme influence of Mars, the native might suffer aggression, rude behaviour and dominating nature. This also results in emotional instability and unfavourable things in native’s life. Mars hampers their professional space and creates situation where the native might seen involved in defamation or exaggerating tiff into a physical fist fight. Mars due to its war strength makes the native reflect this fighting nature into professional life. It affects the ethics and discipline of a person. In certain cases, due to Mars’s impact on their health they might not be physically strong to give their 100 percent into their job. For instance, Mars in the twelfth house can make the person emotionally unstable. These physical and mental instabilities alter their perception into a tad negative one. In case of benefic planets aspect, the native might be highly focused on living the best life, create life altering gadgets/solutions and a disciplinarian.

Effects of Mangal Dosha in Girl

Mangal dosha highly affects the personality of a native. In case of a female native, these personality traits of negativity like dominance, anger issues causes destruction of relationships, their own health. Manglik women are highly independent and primarily need their space and freedom even in an intimate marital relationship. Mars delays their marriage due to family issues or health issues. They may never get a yes from prospective matches regardless of looking dashingly beautiful. Especially when a girl is under Mangal Dosha marries a non-manglik, she is often looked upon as an evil element by the mother-in-law. In some cases, when Mars is malefic, even on the Manglik native, it can cause life-threatening dangers to their life, provided that other malefic combinations are present as well. In certain malefic cases, the concept of a long term monogamous relationship and loyal marriage remains an issue. They might face health issues while conceiving, face multiple miscarriages or experience health challenges even after pregnancy. In extreme scenarios, some women may never deliver a baby in their lifetime.

Effects of Manglik Dosha in Boy

Formation of Manglik Dosh in men may create problems related to maternal relationships, their education, assets, vehicles and family tradition. The effects hampers their peace of mind and emotional health. Their inherent aggression due to Mangal dosha makes them violence with traumatic childhood or teenage with many physical scars. Commonly, Manglik men will be aggressive, easily angered, tall, strong features with fiery eyes and tough voice/speech. They will pick up fights with everyone, have bad influences as friends. They could be more devoted to their mother than father, stubborn and irrational to their siblings. They will be arrogant and highly inclined towards materialists pleasure. If more planets like Rahu and Venus are polluted in the chart, these natives could be over sexed and cheats their partner. As a parent, manglik boy/men might have issues with their children, they may have less or no respect from their children. In certain extreme cases, they may never father a child.

In Hindu culture, marriage between manglik and non-manglik is one of the most feared things. Planet Mars is associated with courage, power, bravery, and fortune but all this reverses when Mars is polluted due to mangal dosha. The native instead becomes ruthless, aggressive, arrogant, and dominant. The main reason being Manglik under Mars’s impact uses their aggression, rage, and anger to control or suppress the spouse. So, a marriage cannot succeed in these situations. This incompatible match might ruin the marriage, result in the loss of someone in the extended family, like the mother-in-law, or even cause the death of the marital partner or widowhood, While this is not always true. Some exceptions enable a Manglik to marry a non-Manglik. If the Non-Manglik native’s chart holds powerful planetary placements and well matched ashtakoota, manglik can successfully marry a non manglik.

In addition, both the Manglik and non-Manglik must change innate characteristics and their views towards a marital relationship. A manglik person must control their anger, argumentative nature and stop being domineering. This can enable a good smooth marriage between manglik and non manglik spouses.

If Mars is positioned in ascendant, 2, 4, or 12 houses it is called Low Mangal dosha. Effects of manglik dosh is said to be mild or moderate in this case. The intensity of the dosha is highly reduced in this case and the native actually does not much due to Mars. Simple remedies are in place to mitigate low mangal dosha.

When Mars is placed in 7th or 8th houses it is said to exert its highest influence on the native causing high mangal dosha. This is proven to be malefic in almost all areas of the native’s life. If Venus and Moon are polluted along with Mars, the native may suffer extreme challenges in life.