In Vedic astrology, when planet Mars is placed in the 1st, 2nd, 4th, 7th, 8th and 12th house of a person’s natal chart, it is called Mangal dosha or Manglik dosha. Of the twleve houses, Mars’s presence in any of these six houses causes Mangal dosha and people with this dosha are called Mangliks.

Mars as a planet of War and fight exerts its strong influence on the native with manglik dosh. On a positive note, Mars can also make the native valiant, focused, highly disciplined. If Mars is afflicted, they will be aggressive, arrogant, and temperamental. Presence of mangal dosh in a native’s horoscope, causes many challenges and obstacles in their career, marriage, and life decisions. The effects of Manglik dosha varies based on the placement of Mars in the chart and other planetary alignment. 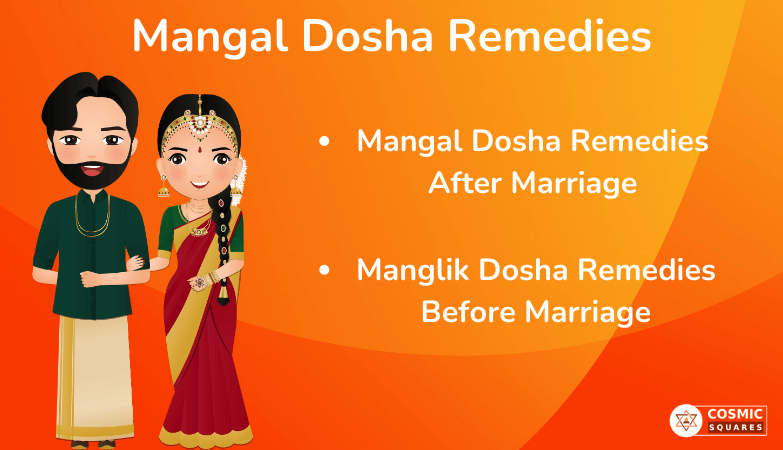 According to Vedic texts, any dosha either due to poor placement of planets or curses from previous births has remedies and rituals. Similarly, many astrological cures are prescribed to mitigate, neutralise and nullify the negative effects of Manglik Dosha. Mars majorly affects the native’s matrimonial aspects. theseeffects of Mars changes based on the house it is posited in, possible planetary aspects on Mars and dasha periods. Based on the actual magnitude of the dosha, there are remedies to perform both on everyday basis, before and after marriage. Here are the list of general remedies from Vedic Shastras,

Observe fast on Tuesdays - Mangalwars. This day is presided by planet Mars and appeasing Mars by fasting and worshipping Him is considered a powerful remedy. During this fast, Manglik natives can consume one sattvic meal prepared toor dal (pigeon dal).

Wear a bright red coral gemstone ring made of gold, copper or brass alloy in the ring finger of the right hand.

When a Manglik native has a potential non manglik match in a marriage, the negative effects of mangal dosha is neutralised by performing a renowned remedial ritual called Kumbh or Ghat Vivah. In Hindu Vedic Astrology, a Manglik native has to marry a clay pot filled with water in Kumbh Vivah or a peepal/ kisar/ Banana tree in Ghat Vivah to rectify the dosha effects on marital life. The native can also marry an idola of Lord Vishnu. Actually, this remedy is performed to get rid of the widowhood or death yoga from Manglik’s horoscope.

manglik dosha cancellation calculatorCheck if you are manglik or not?

Manglik Dosha affects the marital life of a native due to Mars’s influence on seventh house, the house of marriage and eighth house, the house of longevity and sexual relationship. If Mars is malefic in the dosha it can mess up the marital life or the health of the spouse. Certain remedies are performed prior to the marriage ceremony of the native. You might have seen and heard stories of many celebrity marriages where either the groom or bride married a peepal tree before actually marrying their partner. This is a popular remedy to nullify the dosha called ‘Ghat Vivah’ (घट विवाह) or Kumbh Vivah. This remedial marriage ritual is known to remove widowhood from a manglik’s life. When the girl or the bride is manglik, she will be marrying a peepal tree or banana tree or an idol of Lord Vishnu or a clay pot filled with holy water like Ganga Jal or temple theertha as her groom. This is considered as the first marriage of the bride. After the remedy ritual, a tiny branch of the tree is chopped or the idol of Lord Vishnu idol is floated in a river, or the matki pot is broken based on the chosen method. The marriage where the girl marries the non manglik boy is treated as a second marriage or remarriage. In the natal chart, remarriages are analysed using 9th house. In this scenario, Mars in houses- 1, 4, 7, 8, or 12  will not have any influence on the house of marriage and house of death.

Another known remedy to mitigate manglik dosha in a girl native is by using coral gemstone; this remedial ritual is done during Kanyadhaan (कन्यादान) ceremony of the marriage. Two coral gemstones approximately of same dimensions are used in this remedy. During kanyadaan, these two corals gems are placed inside the right palm of the bride. Her father or a paternal relative, in case of absence of the father is asked to pour water on her right hand washing these corals, while she holds one in her hand and lets the second coral drop into a vessel. The first gemstone is worn as an ornament, like a ring or pendant, throughout her life. This remedy saves her possible misfortunes of mangal dosh. The second gemstone is offered to a temple or discarded in a waterbody.  In the future, if the gemstone is lost or misplaced, it must be bought and borrowed from her parents or paternal side without repeating the ritual.

In case if the boy is Manglik, same marriage (विवाह) ritual is performed by the manglik boy. Instead of peepal tree, kikar tree or a kikar tree branch is used in this remedy. The manglik boy marries this tree or a clay pot and this is treated as his first marriage. Post marital ceremony, the kikar branch or the clay pot dropped in flowing water streams.

Even after performing major remedies before marriage, it is important to worship Mars and do simple rituals to avoid possible effects of Mangal dosha on the marital life. These simple techniques can ease the strong impact of Mars on the couple granting conjugal bliss and joy.

If Mars is placed in the 1st, 2nd, 4th, or 12th houses in a horoscope, it is considered as a mild version of manglik dosha. The native faces only a modest influence of Mars and most arenas of life go smooth and unaffected. If you are a manglik with low mangal dosha, these remedies are to be followed both before and after marriage to elevate your life and to keep the Mars’ influence under tab.

When Mars is posited in the 7th or 8th house in a native’s horoscope it is said to be an intense form of Manglik Dosha. Since seventh and eighth houses are connected with marriage and marital partner, Mars’s aspect on these houses can pose severe challenges in marital life. These remedies can be followed both before and after marriage including Ghat vivah for diminishing the negative effects of Mars,

What is the most powerful mantra to reduce Mars’s malefic effects?

Does the remedies really help us escape the bad effects of Manglik Dosha?

Remedies help mitigate the negative effect of the dosha by appeasing Mars, the Karaka of the dosha.

Should we continue remedies even after the marriage?

Yes, we should. if you are manglik, performing some simple worship remedies can help get rid of many challenges in marital life.

Where can I perform Manglik dosha puja?

Other than Mars, which other Gods can i pray for dosha remedies?

We can worship Lord Ganesha and Lord Hanuman as part of remedies. Their divine blessings can effectively control the impact of the dosha.