What is manglik dosha in boy? Manglik dosha in a boy is as afflicted as it is in women. Presence of Mars in the houses- ascendant/1, 2, 4, 7, 8 or 12 causes Manglik dosha or Mangal Dosh and the native is referred as a Manglik boy. Both men and women can be manglik. Manglik in simple terms means planet Mars is dominant in the horoscope and the native will be under influence of Mars’s energy. Mars is a stern war planet related to weapons, battlefield, fights or aggression. 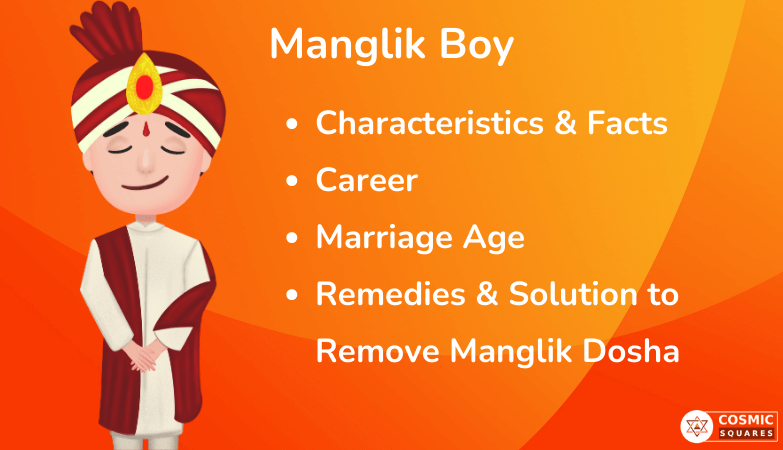 Mars or Mangal is one of the powerful navagrahas with deep impact one’s life. Mars has fiery, volatile energy that can have dual effects on the native. On one hand, this Martian energy can be expressed as a great tool to self and the society around the native in the most constructive purpose. On the other hand, it can have a destructive effect on the native’s life causing excessive impact on all arenas of their life. Manglik boy is known to be highly energetic, deep sense of justice, strong physique and strength to fight for justice. Manglik men have a volatile, irrational temperament. Mars under extreme affliction, can the manglik man bold, domineering and show dictator like attitude.

Being under Mars’s influence does not always mean negative influence. Mars in manglik dosha can also render constructive energy on the native based on the Mars aspect and the benefic planet placements in a chart. For instance, Mars in the twelfth house native will be a selfless giver and is capable of great spiritual ascension. They will be vibrant and energetic, their presence can motivate people in their surroundings

Being Manglik has varied impacts on the native’s life, yet the marriage aspect and marital life receives the most impact of which the common effect is the unprecedented delays despite boy native’s handsome macho personality and highly successful career. Manglik men get married very late in life, late 30, 35 even 40 in some extreme cases. Delay in marriage is caused by Mars due to family issues like sickness in parents’ health or financial disharmony in family, chronic diseases for the native, or lack of trust or faith in opposite gender due to childhood trauma.

It can be generally noticed that Manglik men displaying great war abilities, natural skills in handling weapons and sharp objects or keen interest in agriculture. The positive aspect on career for a manglik is their super strong determination. They are highly self motivated towards their massive goals in life. They can be enthusiastic and creative with extreme boldness in their career choices. They may display crazy madness in their idea thought process and achieving their dreams.

They have exceptionally good driving skills that helps them excel in motorists, car racing, motor sports. They love to speed things up.  They also have inspiring talent in outdoor sports, Manglik boys make great athletes and weigh lifting champions. They can witness massive success in career options like wrestling, sumo or martial arts pro.

Mars in the houses- ascendant, second, fourth and tweflth houses cause low or moderate mangal dosha. It is said to be moderate or low based on the impact of Mars on the native. This dosha has least to interim impact affecting one or more arenas of life. Low Mangal Dosha effects are mostly related to ill effects on physical , emotional and psychological status. It can also affect body fluids like blood, creative fluids and lymph. It can pose some hindrances but quite deep on certain arenas of life based on Mars’s placement house, for instance fourth house Mars can lead to broken eduation, no family ties, or unstable job and finances.

Mangal dosha due to Mars in the seventh and eighth houses is called high or extreme mangal dosh. These natives are said to be under strong influence of Mars. High mangal dosha has extreme and traumatic effects on the boy’s marital life. It can disrupt both family life and professional life of the native. There will be constant clashes and lack of happiness in married life. This arena of the life is most hit due to this dosha. It also affects their physical relationship with their spouse, spouse’s health condition, longevity, their spouse’s hidden nature. The native may find their spouse an extreme mismatch on their sexual and emotional needs.

Mars is also a planet of extreme violence and harshness, and Mars being in the 7th or 8th houses bring this aspect into marital life. The native may possibly experience emotional violence or physical violence in their married life. In a male chart it might in accidents, abuse or excessive mental torment from their spouse or through their immediate family. Most fearsome effects from double and triple manglik doshas include legal separation with defamation, sudden death of the spouse, betrayals.

If a boy's natal chart has Mars in any of the houses- 1st, 4th, 7th, 8th or 12th house in Cancer sign along with Sun or Rahu or Ketu it creates Double Manglik Dosha. In other words, Manglik dosha due to the combination of Mars and Sun or Rahu or Ketu in ascendant, 4th, 7th, 8th or 12th houses doubles the manglik dosha effects and is commonly referred as double mangal dosha ; a native with this dosha is called a Double Manglik boy.

How To Remove Manglik Dosha Of Boy After Marriage?

A native under Manglik dosha must continue performing simple nivaran remedies even after marriage to keep Mangal’s effects under control without hampering their marital life.

How To Remove Manglik Dosha Of Boy Before Marriage?

Vedic scripts suggest remedies to be performed both before and after marriage regardless of non-manglik or manglik marital partner. In most scenarios, remedies before marriage is performed in cases where the manglik boy is set to marry a non manglik girl. To remove Manglik Dosha before marriage for boys, a marriage ritual called Kumbh Vivaah or Ghat Vivaah is prescribed. In this ritual, the manglik boy marries a kikar branch, Peepal Tree or a Banana Tree or clay pot. In this remedial marriage ritual, manglik boy marries a tree branch or a sapling of the tree that is treated as a bride. The clay pot or the tree is later broken or cut to signify the Manglik boy’s widowhood is ruled out. This is considered as the first marriage for the manglik boy. The actual marriage with a non-manglik bride is treated as a second marriage.

Can a Manglik Boy Marry a Non Manglik Girl

Generally, a high manglik boy should only marry a manglik girl due to their extreme mangal dosha. Extreme or high mangal dosha can be neutralized only by marrying another dosha afflicted native. A manglik boy with potent manglik dosha without any cancellation planetary placements or benefic affliction has to marry a similar manglik to remove the blemishes of the dosha. By marrying a manglik, they not just mitigate the dosha effects on marriage, it actually cancels out the complete dosha in both the manglik boy and manglik girl.

Both men and women can be Manglik. A native with Mars in lagna, second, fourth, seventh , eighth or twelfth houses is said to be under mangal dosha.

Can a manglik boy have a good career?

In reality, a manglik native can have a great career when Mars’s energy is channelized better. Their passionate nature and aggressive energy can aid massive career success.

Should a Manglik boy marry only a manglik girl?

Generally, it is said to be the best remedy in case of a extreme manglik case. When a manglik marries another manglik, the dosha effects in both of them are nullified.

Is there solutions to remove manglik dosha in boy ?

Yes, there are powerful solutions suggested by Vedic texts to reduce or neutralize manglik dosha effects for manglik men.

Can a Manglik boy marry a non Manglik girl ?

Yes, of course. When both the manglik girl’s and non manglik boy’s horoscopes have over 24 ashtakoota gunas matching with robust planetary placements, certain remedies can be performed to facilitate the marriage.

When Mars is placed in houses – First, Second, Fourth, 7th, 8th or 12th in a birth chart of a boy, he is meant as Manglik boy.