Manglik dosha can be canceled! Yes, that’s true. This most fearsome dosha that determined most marriages in India can be actually nullified from certain planetary combinations are seen in a horoscope. Yogas and benefic planetary positions in a chart can effectively cancel Mangal Dosha.

How is Mangal Dosha formed in your chart?

Planet Mars or Mangal in Sanskrit is the planet that causes Mangal Dosha. Presence of Mars in 1st, 2nd, 4th, 7th, 8th, or 12th houses of the natal chart causes Mangal dosh or manglik dosha. This placement is called a dosha since Mars exert mild to extreme negative influence on the native turns negative when placed in these houses. The native is termed as Manglik.

In some parts of India, this Dosha is also known as Angaraka, Kuja or Chevvai Dosham. Manglik dosha primarily affects the native’s personality and marital life. All aspects of marriage takes a hit from Mangal dosha based on the magnitude of the dosha.

But there are some planetary combinations and yogas that can cancel this dosha. In some cases, it can neutralize major effects of this dosha and bless blissful married life. 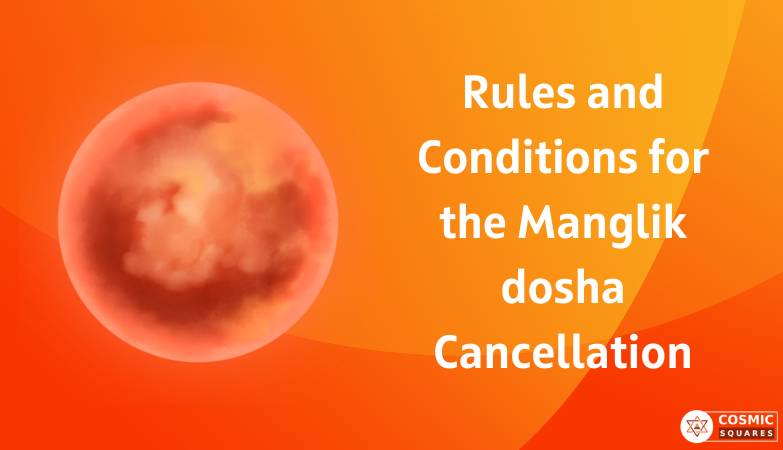 Rules and conditions for the Manglik Dosha Cancellation Check

Following are the planetary combinations or benefic alignments in a chart which can cancel the dosha completely or neutralize the Martian negative effects on the native,

Which planet is associated with Mangal Dosha?

Who is a Manglik?

Should we check Mars’s position in Navamsa chart for Mangal dosha?

For marriage aspects, it is imperative to check Mars’s position and state in both Natal chart and Navamsa Chart. If Mars is positively exalted in Navamsa, it cancels Manglik dosha.

What forms Mangal Dosha in a natal chart?

Is Mangal dosha affected by the benefic planets or yogas?

Yes, Mangal dosha can be canceled or nullified by benefic planetary combinations or Raja yogas are present in a chart.